Dark Waters: True Story of the First Human-Powered Circumnavigation of the Earth by Jason Lewis [2012]

This is an incredible story.  The author Jason Lewis is an Englishman who in his 20s embarks upon an adventure to circumnavigate the world entirely under human power. This is the first in a trilogy of books about the journey.

The project is conceived on a shoe-string and my reaction to the first part of the book was admiration at the fearlessness of Lewis and his friend Steven Smith, whose idea it was.  It starts with a drunken plan which actually germinates into a real journey, which is great. Preparation for the journey is at the other end of the spectrum from the sort of detailed, hollowing-out-toothpaste-handles-to-save-weight list-making attention to detail which usually accompanies these sort of adventures.  Instead, the pair are desperately poor and often hungover throughout the first section of the book and somehow manage to get their pedal-powered ship Moksha built and their kit together just by bullying and persuasion. 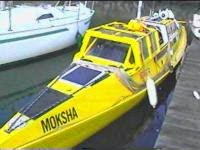 The core of the book is about the 111 day journey pedalling the Moksha across the Atlantic and the tone changes abruptly once they set off.  The contrast between the haphazard preparation - Smith (in charge of navigation) is still learning to use the sextant a couple of days before setting off - and the enormity of the challenge and the open water in front of them is genuinely surprising.

At sea there are some breathtaking passages which had me gasping out loud - huge waves, near misses with mysterious sea creatures and other ships: it's really exciting. Contrasted with this intermittent excitement is the claustrophobia and discomfort of being trapped in what is essentially a coffin-shaped pedalo with another person for more than 3 months.  The author and his partner suffer physical deterioration (boils, saltwater chafing) which reflects the fracturing of their relationship.

The book is very funny but it's not light - the author is a deep and sometimes prickly man, who is looking for some sort of meaning beyond the adventure. The trial of the sea journey and the repetitive nature of the work leads him to meditation and mindfulness which I'm interested to follow over the next two books. This in itself is enough to differentiate this book from a standard wry Englishman's travelogue.  I am really pleased that I picked this up and I can't wait to read the next book, which continues the adventure overland through the USA.
Posted by Al Turnbull at 09:26