Like almost everyone else, I think Michael Lewis is a captivating writer and I downloaded this book within a couple of days of its release.  The first thing to say is that it is a little disappointing in that it is not as compelling as The Big Short.  But this could just be the subject matter.

Key points I took away from this book:

1     The domination of high-frequency trading as a proportion of all share activity. The majority of all share purchases are not made by investors buying a long term share of the company's profits, but short term deals to arbitrage price anomalies. I don't have any sort of moral objection to this, as in itself it is not objectionable (the real problem, as Lewis identifies, is the lack of transparency - a rigged system is only really a problem if people think it's fair). What is interesting is how far removed this sort of trading is from the traditional picture of company investment that is painted by fund manager advertisements and Warren Buffet hagiographies. 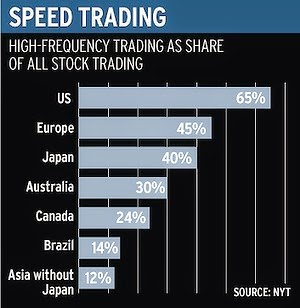 2     The overwhelming sense that finance is an insiders' game and that if you can't tell who the fool is, it's you. The idea that a retail investor can get any sort of edge in this environment is ludicrous. Although the book is about Wall Street, what Lewis actually describes does not seem like capitalism at all.

3     This is a technical point but I did wonder whether high frequency trading would actually be possible in the UK, or whether Stamp Duty payable on each deal would crush the returns, which are after all typically based on making millions of small, profitable deals, each of which would be taxed. I have not seen this argument made very strongly in the public discussions on high frequency trading.

An interesting book that will make you wary of buying anything but the cheapest index fund ever again.
Posted by Al Turnbull at 08:20