This is a travel book describing Tim Moore's attempt to cycle the course of the Giro d'Italia of 1914, using a historically accurate bike. I picked it up because I heard pieces of it on Radio 4's book of the week and I had read some of the author's other books.

It's an insubstantial book and the slightly arch authorial voice can be grating at times. Also, the technical aspects of assembling the bicycle appeal to a certain character trait which is under-developed with me. The main point that stays with me is the brutality of the 1914 Giro. Moore makes the point that the cyclists taking part were predominantly country boys fleeing poverty (and famine) in pre-industrialized rural Italy. As a result, they were prepared to put up with a level of hardship for relatively little reward that seems astonishing today. 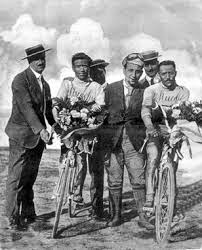 The average stage length was 395 KM.  Because some of the stages took 20 hours to complete, they started at midnight so as to ensure an early evening finish the following day. Only 8 riders finished the race, from 81 who started. Moore covers the course at a significantly slower pace, and the modern travelogue is interspersed with details of the original race. There is a lot of historical cycling information here which did not really grab me. However, I am glad I read it. 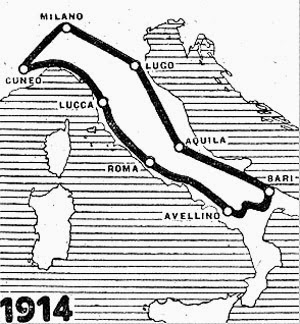 As an aside, the author gives an interesting insight into the social stratification of immigrants in Italy by observing the concentric rings of prostitutes that circle Italian cities as he approaches them. These are (in ascending order of price): African, Old Eastern Europeans, Young Eastern Europeans.  An emergent order of sex workers.