I picked this up because I had never read it and it seemed a glaring omission and I'm really glad I did.

Some interesting things which have stayed with me:


The character of Casaubon.  Eliot refers to him several times as resembling John Locke. This struck me as very apt but it was not until I finished the book that I looked up a picture of Locke and found that it exactly mirrors the mental image I had: 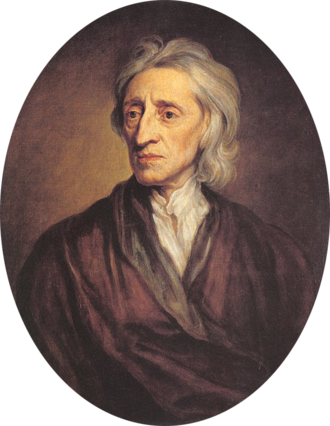 Casaubon identifies himself with the creation of an all-encompassing theory of mythology; however, it becomes clear to the reader (and it becomes clear that Casaubon also realizes this) that he has no chance of executing this, and that in fact any publication of his ideas will expose his own inadequacy.  Casaubon allied himself and his identity to this lofty vision as a younger man, and then was unwilling to give it up when he realized that he could not fulfil his potential.

The character of Fred Vincy. He initially identifies himself as an aristocratic sportsman of independent means but his expectations are dashed following a highly melodramatic bit of nonsense involving a will of a distant relation.  As a result, he is forced to work for a living by apprenticing himself as a land agent to Caleb Garth.  This resetting of his expectations and transition from a life of leisure to one of duty allows him to marry and achieve some sort of peace, in contrast to Casaubon.

Lydgate's marriage to Rosamond.  A really delicate and well-executed portrait of a marriage by an intelligent man to the wrong woman for the wrong reasons.  Unlike her brother Fred, Rosamond cannot reset her expectations.  Her refusal to acknowledge the household's growing financial problems felt strikingly modern to me.

However, the central character of Dorothea left me rather cold.  I also wish I had known more about the 1832 Reform Act before I read the book because I think this would have made my reading richer.  I will definitely read it again.

Reading Middlemarch made me think a lot about youthful ambition and expectation and the difficulty we have in moving beyond this.
Posted by Al Turnbull at 10:41 No comments: